The Next CMO blog

Aligning your activities with campaign goals is critical to your success, but what happens when you align to conflicting goals?

A highly anticipated event at a complex time

Political junkies across the ideological spectrum have been analyzing and commenting on the Trump 2020 campaign return to the rally circuit for weeks. The rally came at an incredibly complex time in US history as the country faced a global pandemic, escalating race relations with the brutal killing of George Floyd bringing the tension well above the boiling point, an increasingly divided electorate, and the collision of all these factors with the return of the rally scheduled in Tulsa on the weekend of Juneteenth.

Despite this, the campaign had been heavily promoting the fact that they had nearly 1 million tickets requested for an event that could host no more than 20,000 inside the arena, with an overflow capability for a few tens of thousands more.

In the end, a little more than 6,000 people attended the event in Tulsa, representing a 0.6% conversion rate of registrations to attendees. In other words, an epic fail in conversion rate. For physical events, you might typically see a drop off of registrations to attendees of 25-50%, not 99.4%. Even for digital events, you can see a range of 33-66% of drop off depending on the content and audience, but never anything that approaches 100%.

Even before the event ended, it has been widely reported that teens on TikTok and Instagram were organizing an effort to sign up for the free tickets on the campaign website to throw off the numbers.

The campaign itself claimed that negative media attention and protestors on site kept people from attending.

So what was the main cause for the failure? The challenging time of global health crisis and escalating race relations? The teens on social media organizing against the campaign? Or the media frenzy combined with protestors?

The answer: D. None of the above.

The core problem is that there were two conflicting marketing goals at play. The most obvious goal was audience acquisition: fill the stadium and draw an overflow crowd. The target was likely to get on the order of 50,000 people to descend on the arena area. The other goal was exposed when campaign manager, Brad Parscale, tweeted some of the registration numbers and excitedly referenced the data haul from registrations. 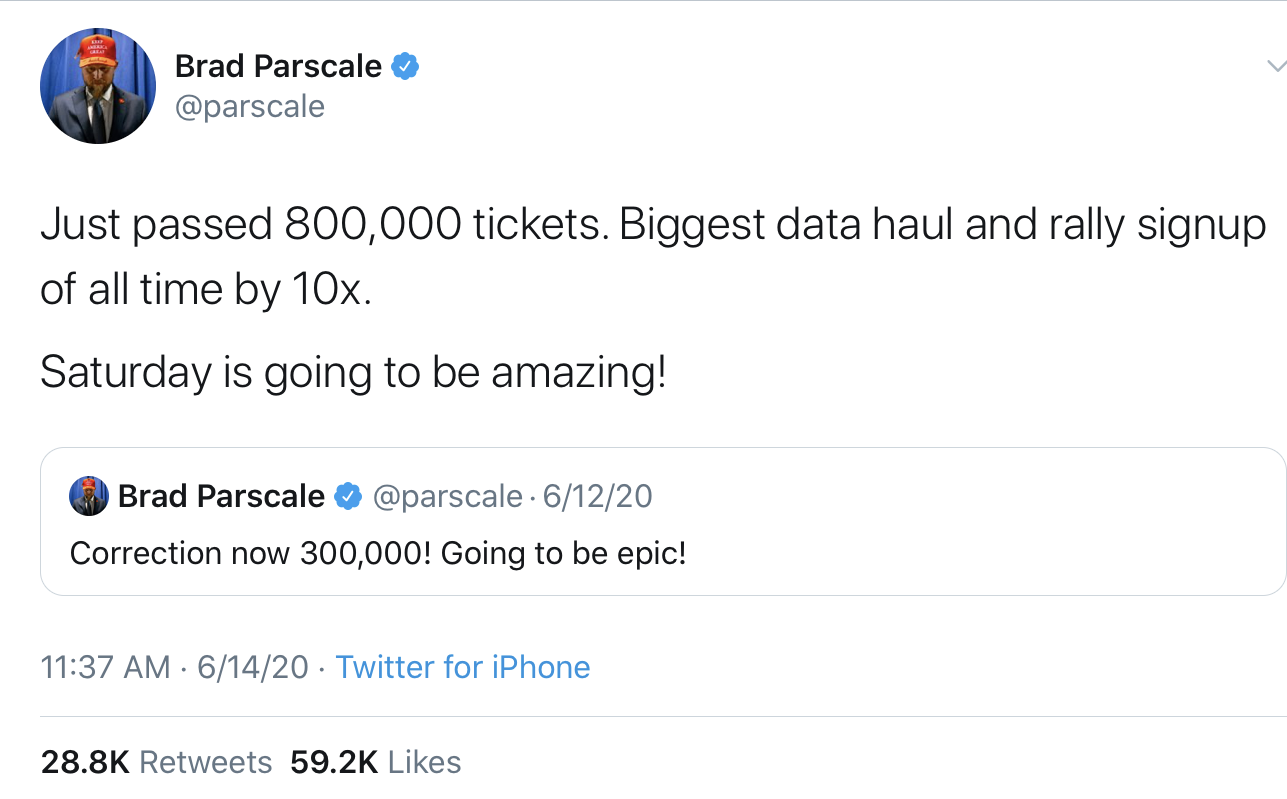 The “data haul” indicates the problem here. As a digitally-centric campaign manager, Mr. Parscale was incredibly excited about the data acquisition opportunity from the Tulsa event. To register for the event, you simply went to the campaign website and provided a valid mobile number in exchange for two free tickets.

Why is that a problem? If your goal is to drive data acquisition, your strategy might be to create the lowest possible friction in the registration process. Don’t require anything except a mobile number. Using that strategy, you maximize the number of phone registrations, but at a low quality. A problem that was exacerbated by the attack of the TikTok teens.

If your goal was to drive attendance to the event, you might use a different strategy. For example, you would geotarget your efforts to reach out to people who are located in driving distance from the event. You would also add confirmation steps to the process to make sure that these people are indeed planning to attend.

Coordinate your goals - and pick the primary one

It is also possible to combine those goals, but you need to make sure that you do so in a thoughtful way. For example, you can make the first step in registration simple and low friction to drive as many suspects as possible, and add lots of new phone numbers to your database. But you must also add additional steps to further qualify the audience. You can explicitly as for confirmation of attendance, or you can add steps that would allow you to infer intent. For example, you could as attendees to fill out a brief survey on travel plans and health history as part of the COVID screening process. You could add an incentive for more data like a special version of the free mask for people who provide more information.

With so much focus on this return of the rally event, the primary goal should have been filling seats. Instead, the allure of the giant data haul for the digitally-motivated campaign resulted in a lot of empty seats, and a very expensive marketing lesson for Mr. Parscale.

Peter Mahoney is the founder and CEO of Plannuh.  Peter has degrees in Physics and Computer Science and studied Latin for 7 years, and then showed up in the wrong room one day and ended up in marketing.  In his 30+ year career, Peter has built products and led marketing for startups and for multi-billion dollar public companies.  You can follow him on Twitter and LinkedIn.

The Next CMO Podcast: Mastering SEO with Bryan Phelps