Struggling to manage currencies in your marketing budget?

You might think that international business falls within the purview of large companies only. In fact, modern companies expand internationally early and frequently.  A survey carried out by USForex and ResearchGate indicated that even small businesses are highly internationalized:

If your company operates internationally, then it will deal with multiple currencies in your budget, particularly in the department that has more diverse and regular spending than other functions: marketing.

Earlier in my career I worked at a publicly traded software company that operated in over 30 countries.  As a US company, it planned and reported its finances in US dollars (USD). Meanwhile, it paid bills, issued invoices and received revenues in numerous currencies such as Euros, Australian Dollars, Indian Rupees, Brazilian Reals, British Pounds, Mexican Pesos, and Canadian Dollars.

Here’s what happened with those same currencies the following year, 2016: 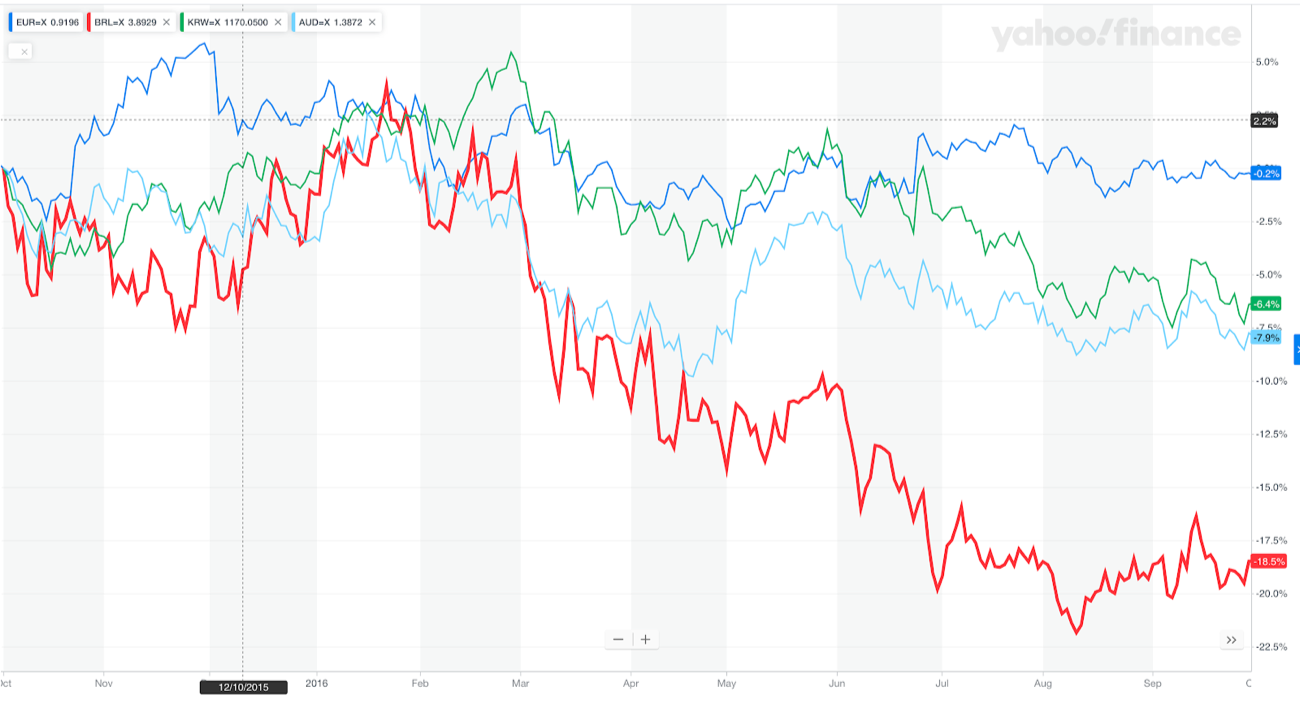 Every currency strengthened against the dollar in 2016. All those international revenues and costs were now larger than planned in USD. Over the course of those two years, the USD value of the Brazilian Real (BRL) essentially halved and then doubled. If you were a marketer working in Brazil, you probably weren’t paying any attention to foreign exchange rates, but if you were working in finance in the US, you certainly were.

There is no-one able to accurately forecast foreign exchange rate fluctuations, because there are so many uncontrollable factors that influence them: electoral results, natural disasters, creation/failure of trade agreements, civil unrest, coups, commodity prices, and so on. Things that impact currency values often happen quickly and unforeseeably, hence the inaccurate forecasting.

Managing a marketing budget that deals with multiple currencies

Currency exchange rates don’t only affect revenues. They also affect costs. Imagine that you work in a US-based company and you run EMEA marketing. Your company allocates $500,000 of marketing program budget to EMEA at the beginning of the year.

Let’s imagine a very simple budget where you decide to spend your entire program budget evenly over 5 events across Europe in London, Zurich, Paris, Oslo and Turkey. And let’s state that you’re able to perfectly predict the costs of those events. You plan out your event expenses at the beginning of the year using current exchange rates. Over the course of the year, the currencies fluctuate in value vs the company’s base currency (USD). To add a little realism to the scenario, I have pulled real Min/Max exchange rates for each of the EMEA currencies from a few years ago:

Let’s assume that when you planned your event expenses,  the USD was at its strongest point in the year, and then as the expenses are incurred, the USD is at its weakest point of the year. From the EMEA marketing manager’s perspective nothing has changed. The expenses were perfectly forecast and planned to be within budget in their local currency. From the parent company’s perspective, here’s what each $100,00 planned expense looks like when it is incurred:

The EMEA marketing budget is $41,279 over budget even though it consumed precisely what was planned in local currency. That’s an 8.26% overspend, which would not win any fans at the US parent company. And it would be unfair to hold the EMEA marketing manager accountable for that variance. So what happens in reality?

Making it clear for everyone - Plan Rates

In our example above, we can see that currency fluctuations are outside the control of the marketing manager. The marketing manager should not try to make accommodations for FX rates in her plan because - as we discussed above - no-one can forecast FX rates accurately.

By the same token, no company can adjust its plans in real-time to reflect foreign exchange rates. It would have to provide a ludicrous stream of continuous updates to investors (“We’re going to make $10M, wait, make that $9.8M, hang on…$10.12M”, ad infinitum).

The way most companies handle this is to set plan exchange rate. This is a currency conversion rate that is agreed at the corporate level at the beginning of the year for all currencies that the companies operates in, for both costs and revenues. It is than used to convert all costs and revenues to the base currency in a consistent manner. By fixing the plan rates, every inside the company can operate and communicate about their plans in a consistent and transparent way.

At a corporate governance level, the company rides the swings and roundabouts of the foreign exchange markets and if the variations are significant, it tells its investors whether there was a business tailwind or headwind created by the FX changes.  On a day-to-day basis, the majority of the staff within the company do not - and should not - care what the real-world exchange rates are.

When there is an especially volatile currency, a company may decide to update its plan rate periodically throughout the year. The teams and departments operating in currencies that aren’t the companies base currency, have their cost and revenue plans shifted to the new plan rates - but their local currency targets don’t normally change. When you operate your marketing budget, the management team at a minimum must understand what the plan FX rates are, and if they are ever re-set over the course of the year.

In addition to setting and potentially re-setting a plan rate, there are other steps that might be taken by your finance team to manage FX risk, including:

It’s easy to see how the last two elements on this list require the involvement of the marketing team at some level. I am not going to cover them in further detail here, though, as our focus is on the most common operational solution to foreign exchange rate variability, which is plan rates.

Plannuh supports multiple currencies within a single budget. Budget owners and Admin users can set plan rates for any foreign currency expenses they expect to encounter over the course of the year. They can adjust the plan rates if their finance organization instructs them to, and Plannuh will apply the new rates going forward.

If a user happens to upload an expense in to Plannuh for which there is no plan rate, Plannuh has a live feed to FX markets, and applies the spot rate until an Admin enters a plan rate. So Plannuh will never reject an expense, whatever currency it is entered in.

All foreign currencies are stored and completely visible in their local currency amount, making it simple for local staff to understand the expenses they have entered. All summary charts and data visualizations are built by mapping all currencies onto the budget’s base currency. For example, if your budget is based in USD, then all expenses will be converted into USD at the plan rates for visualization purposes.

Check out the video below for how it works:

Dan Faulkner is the CTO of Plannuh.  Dan has degrees in speech and language processing and marketing.  He got his marketing degree after running research for text-to-speech synthesis research at SpeechWorks (now Nuance) and must have been looking for something easy to do.  You can follow him on Twitter and LinkedIn.

The Law of Small Change: 9 inevitable losses in your marketing budget, and how to avoid them

Plannuh is a cloud-based system for building, managing, and sharing your marketing plans, budgets, goals.

contact@plannuh.com
RTnerdCMO: This is the time of the year that #spreadsheets start to really bum me out. That’s why I built  plannuh  - a marketing plannin…

October 4, 2018
RT  nerdCMO : I'm giving a #lightningtalk at #StartupBOS on an emerging #techtrend - carving out your space in #Enterprise #AI. Get your tic…