Everything you need to know about executing a rebrand

Evolving your brand is one of the most important responsibilities for a CMO.

Some of the projects were quite successful, but I made some mistakes along the way too. What follows is a summary of my experience that you might find useful, or at least mildly entertaining.

I thought I’d start with my favorite branding story, a rocky road on the way to a successful rebrand - and ultimately renaming of a company.

Back in 2004, I was running marketing for a cloud HR software company. A good friend, Steve Chambers, called me and told me that the company where he was CMO, SpeechWorks, was just sold to a local company called ScanSoft. Steve was taking a new role, and he wanted me to replace him to run marketing.

I went to the ScanSoft website and had an incredibly negative reaction. The word that came to mind was “yucky.”

Here's a screen grab from the web archive of the old ScanSoft site: 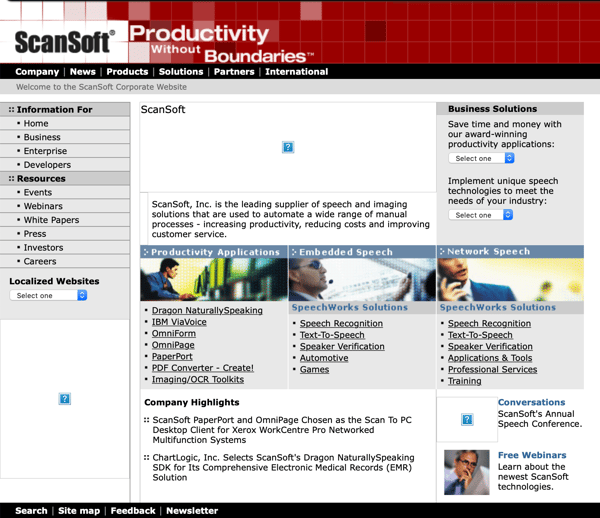 But Steve was one of the smartest people I knew, and someone I deeply trusted, so I decided to join him as the VP of Marketing for the SpeechWorks Division of ScanSoft.

A few weeks into my tenure, I got a call from the ScanSoft CEO, Paul. He told me that he had a top-secret project for me, “I want you to rename the company.” I was thrilled. What a great opportunity to reposition the company to align with its new strategy of delivering speech solutions. But then Paul said, “And if you want to know the new name, the answer is SpeechWorks.”

I thought it was a terrible idea. Anything that ends in “works” seemed small to me. And while using “speech” in the name may have seemed OK for the moment, I wasn’t sure that it would last for a decade or more, given that the company was headed in the direction of broader artificial intelligence systems. But Paul went on to explain that we owned the name worldwide, and we had a limited budget for the project. So I relented. “SpeechWorks” was indeed the answer.

I spent the next several weeks working out the details of the plan with a small team. Because of the complexity of the company and the desire to execute the project globally, the cost for the project would be more than $1 million. A week or so after presenting the plan, I heard back from Paul with a simple message: “Never mind.” Frustrating.

About six months later, I got another call from Paul.

“Remember that renaming project?” he asked.

“Yes,” I said while trying not to roll my eyes.

“Good. What do you think about the name Nuance?”

“I love it! Unfortunately, someone else is using it,” I responded.

That somebody was our biggest direct competitor, called Nuance. Paul went on to tell me that we were going to buy Nuance and that they wanted us to take the name. I loved it. Even though we had some explaining to do in the short term because of the competitive nature of the company, it was a great name in the long term. It was a real word with a domain we owned worldwide - and it evoked the kind of subtlety that was required for machine intelligence.

The project was complicated by the fact that we were subject to a Second Request from the Antitrust Division of the Department of Justice. That meant that we could not cooperate with our peers in the new company until we got through the extremely detailed discovery process.

Once the DoJ approved, we had only about six weeks to pull off a renaming, messaging update, website relaunch, and internal training, because we had an impending sales kickoff meeting and customer conference that couldn’t be rescheduled. In the end, thanks in no small part to a fantastic team from “the original Nuance” led by their CMO, Lynda Smith, we were able to pull it off.

While I don’t recommend that approach, the process taught me a lot about what to do, and what not to do.

Here is a recent image from the Nuance website with their most recent branding: 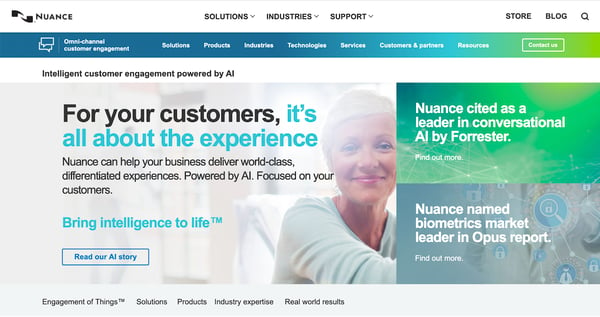 Important considerations for a rebranding project

Start with the strategy

Your branding project should emerge from your strategy, which should be reviewed regularly. At least once a quarter, you should assess whether your current brand (including your brand promise, voice, visual identity, messaging) accurately represents your strategy. If you make a significant strategic shift (like Nuance going from an OCR and imaging software company to a speech and natural language company), it is a good time to evaluate your brand.

But sometimes your strategy evolves more slowly, and you need to make sure that your brand evolves along with that strategy. After we renamed the company at Nuance, we went through several brand evolutions to represent the progress we were making as a company.

A name change is a huge commitment - and it isn’t always necessary when you are rebranding. At the highest level, there are four types of rebranding projects:

The key milestones in a rebranding project

While all projects are different, most rebranding projects follow a similar outline. The major milestones include:

How much should you budget for a rebranding project?

While there is always a huge range of potential costs, the projects I have seen over the years fall into a few major cost categories.=:

A note on “realization”: Once you “finish” your project, you will enter the phase where you roll out your new brand and update the assets you have in the field already. For a startup, this isn’t a big deal, for a big company, this can add millions of dollars to the price tag.

I can summarize my lessons learned in a few short points:

I’ve had the opportunity to work with some great resources in the past. Here is a list of resources who have delivered great results for me in the past:

The Next CMO Podcast: Revenue Acceleration with DRIFT VP of Marketing Kate Adams

Plannuh is a cloud-based system for building, managing, and sharing your marketing plans, budgets, goals.

contact@plannuh.com
RTnerdCMO: This is the time of the year that #spreadsheets start to really bum me out. That’s why I built  plannuh  - a marketing plannin…

October 4, 2018
RT  nerdCMO : I'm giving a #lightningtalk at #StartupBOS on an emerging #techtrend - carving out your space in #Enterprise #AI. Get your tic…